Yet another boarding trip

Bloody heck, another year. Must be time for the annual lads ski trip to France.

This time we went to La Plagne. I think there were about 17 of us in the end. We met up with a group of Welsh lasses as well while we were there, so had quite a mob in the end.

The snow was a little disappointing initially, so I switched to skis for a couple of days. But after a dusting of fresh powder, jumped back on the board to find some of the un-tracked white stuff. The last couple of days were probably the best. A huge group of us were just barrelling around, all getting more competent and confident as the week had gone by. We were all shifting fairly quickly down-slope, that is for sure.

Not sure what I did the following few months. Was a combination of Project work, poker nights, track days, football, hiking etc...

Bike trip through the Alps

The next trip though was a little impromptu and the timing was amazing.

A friend I'd been riding with for the last couple of months was heading back to Poland to live. His brother had come over and they'd gone up to Scotland to buy a new BMW motorbike. (A little cheaper up there) Their plan was to head to the Alps for a week or so before heading home.

I quickly arranged some leave and joined them on my Viffer. Got caught in a torrential downpour on the way to Folkstone. Was completely soaked. My goretex outer helped old off the water, but we were literally riding through a few inches of water after about 10 minutes... was one of the strongest rains I've seen in the UK.

Jumped on the train and went under the tunnel and magically the weather was nice and sunny. Weird considering there's only 20 something miles difference between the two. My theory is the French farmers can control the weather. Honestly, the days were gorgeous and sunny and it only ever rained at night (for the first three nights... after that it was fine the whole time - apart from one afternoon in Austria).

We made reasonable time getting down to Geneva. Just cruising at a relaxed 80kph for most of it. Camping wild where we could, but occasionally using a camp ground if there was nowhere suitable.

What was so great about the timing was while I was in France enjoying 35 deg C sunshine, everyone back home in Cheltenham were without water after some of the worst flooding in a century. I honestly couldn't have picked a better time to head away. In fact, I can hear the alps calling again... soon. (perhaps)

The only downer about the whole trip was in Austria saying goodbye to the guys as they continued north. That night, my bike fell over (the tarmac under the center-stand had given way) so we had to do a couple of hours work on the bike getting it into rideable condition. After that I had some great riding through Italy, but I really didn't enjoy it as much as I thought I was going to, so I ended up going back to France and doing the Grande route des alpes. Just awesome roads and amazing scenery..

I did do a couple of track days on the bike which were a lot of fun. One at Mallory park and the other at RAF Wittering.

Was great to let loose on the bike in a controlled environment. I think I gave pretty good account for myself. Even found myself enjoying the odd rear end slide when powering out of corners.

It was an amazing feeling to be fully lent-over at close to 140mph while avoiding cones on the main runway at Wittering. Mallory park was a little frustrating as a few guys in my group had offs. One was actually quite nasty with a broken collarbone. (Think he high-sided coming out onto the main straight.) Actually, I can sort of understand that one. Was a strange corner where you're completely on the gas, fully lent over.. and your foot gets trapped between the tarmac and the gear selector as you try and change up a gear. Really makes you want a reverse gearbox. As it was I ground away at my footpegs just that little bit more.

I have Keith Code's 'Twist of the wrist 2' to thank for dramatically improving my riding skills. I'm not sure I put even half of what he said into practice, but I definitely got to try things I'd never done before. (Mostly around weight-shifting) That said, I'm sorely tempted to take the California Superbike School training course that they hold regularly at Silverstone.

Finally, at the end of the year, I went back to NZ to have my first Christmas there in ages. Stopping off first in Melbourne catching up with several friends (I still love Melbourne just as much as before) then to Auckland to stay with my brother Mark. Good times! 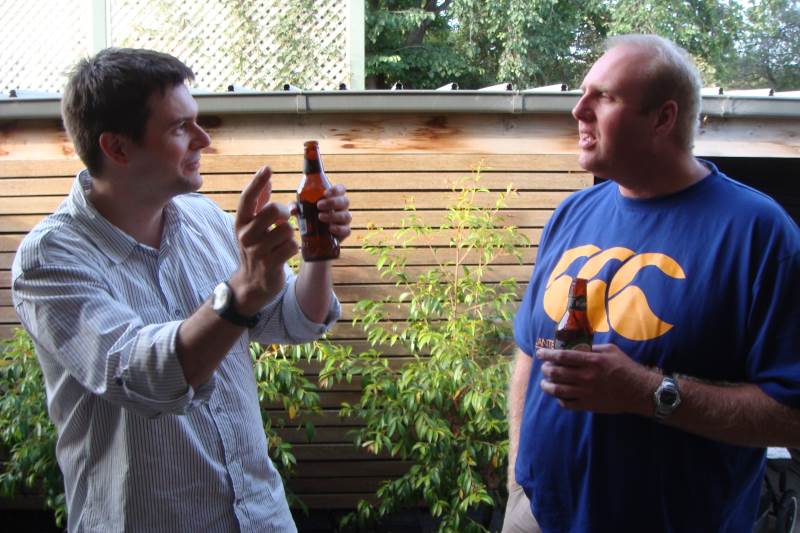